Labyrinth is one of my all time favorite movies!
I seriously still know it all by heart.
It was such a part of my childhood.. ahh fond memories.
So at the beginning when Sara enters the labyrinth the walls have these cool eyeball moss plants growing out of them. I wanted a potted version for my witches garden.
Using the eyeball methods form #7( The Eyes Have It) I made  two different sized eyeballs.
The snake like bodies are made from a coat hanger cut up with wire cutters.
I wiggled them around until I had the pose I wanted.
Inserted them in floral foam inside a little terra-cotta pot,
and then glued on my eyeballs. 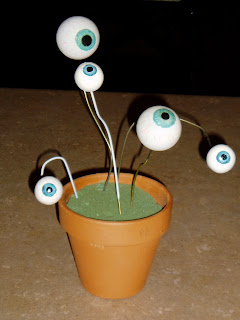 I built up the stalks with foil first..... 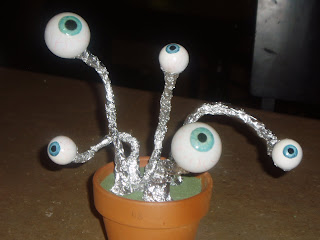 Then went over with a coat of Celluclay instant paper mache.
I love Celluclay!!!! It's basically Papier Mache pulp with the glue already in it. You just mix in water and mush it with your hand until it feels like clay. You can get it at the craft store usually in the clay section in a big bag... it goes a long way too.
I use my 40% off coupons and stock up.  Great stuff ! 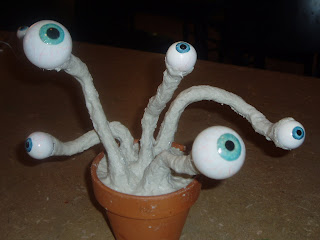 After one coat was dry, I went back over.
I just stick it out in the sun between coats and it dry in a couple hours.
One good thing about Arizona in summer....outside is like giant dry oven
perfect for drying paper mache fast!
I actually do not want it smooth because we are going for a natural mossy look,
so I added more clumpy, lumpy pieces. 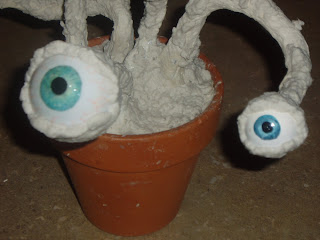 Um I forgot to snap a picture of the paint process... oops!
I basically went over in layers starting with a black brown base, then lightly stippling over with yellow ochre, burnt umber, and a mossy green.
Look at the moss you choose and just pull colors from that.
I will come back and post pix of the paint part later.
I am making another one... of course!
Next using 50/50 watered down Elmers glue.
I brushed on glue and stuck on moss all over.
This part is a little messy. 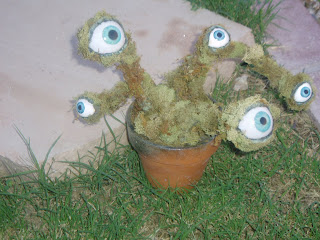 I used a nicer moss. I would go with the better stuff for this,
the cheap stuff just falls apart, the good stuff has nice workable pieces .
Here he is with his little buddy the "ello" worm.
Yes after making him I had to make the little guy to keep him company.
I molded him out of fimo and painted him used blue feathers for his hair. 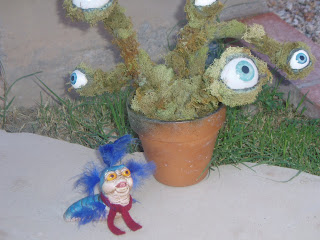 Not so scary now is it? 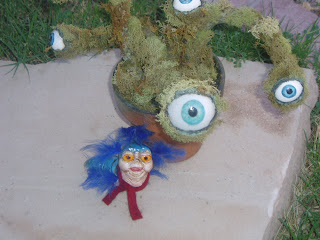 Things aren't always what they seem in this place... you can't take anything for granted.

Email ThisBlogThis!Share to TwitterShare to FacebookShare to Pinterest
Labels: Plants