As I have mentioned before, I am doing a Haunted Forest/ Faerie Tale Witch Cottage theme in my kitchen this year.
So I awoke one night and realized I must have a haunted tree dividing my kitchen from my living room! I became obsessed with the idea, and immediately started trying to figure out the best way to do this. 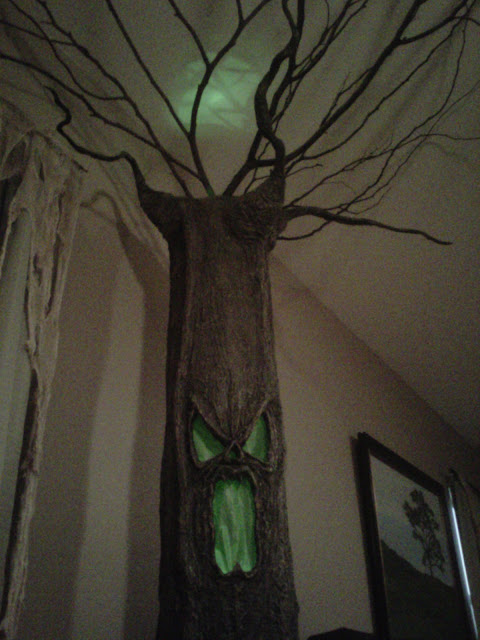 First I decided I wanted it to be compact and capable of being broken down in two parts for storage.
It also needed to be tall (my ceilings are 10 ft) but incase I move to a shorter or taller house one day it needs to be adjustable. I also wanted the branches to sprawl across my ceiling.
I had a lot to consider!
So I decided to use concrete pour molds for the base.
They are around $10 each for the 12" size. The two I bought, one was actually a little bit smaller and fit snugly inside the other, perfect for what I had in mind! 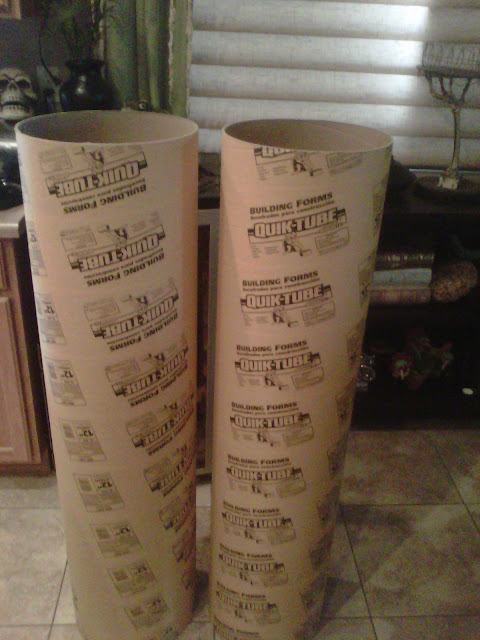 I thought about using chicken wire, but I really hate using the stuff and if I can avoid it I will.
I found some flexible black irrigation pipe in our garage and decided to use it as a stopper for the top tube to rest on.
I hot glued it just a little to hold it n place (about 6" from the top)  then went over it in Gorilla Glue to really make it strong.
PS. The bottle exploded and made a huge mess. I still have glue on me! 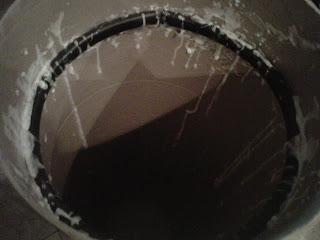 See, what a Mess!
I wanted a strong base since its so tall.
I forgot to get a cheap piece of plywood when I was at the store, but I was into the project by now and not wanting to run back out, I grabbed a round plywood circle I already had laying in the garage and gorilla glued it on the bottom. 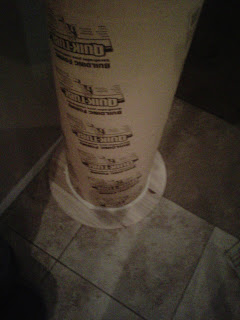 When all was dry, I crumbled up newspaper to taper it down. I also cut out a hole for my uplight to go in the back. 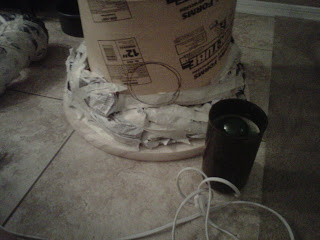 For the roots I crumbled up balls of news paper in varying shapes using masking tape to secure them. 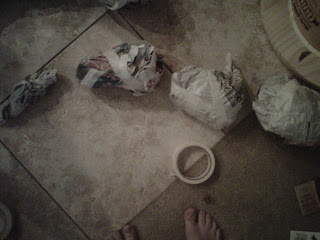 I coneccted them with more paper at the joints and more tape. 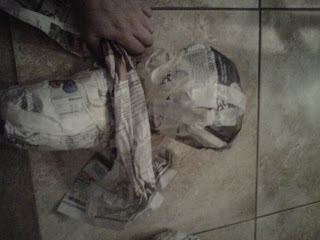 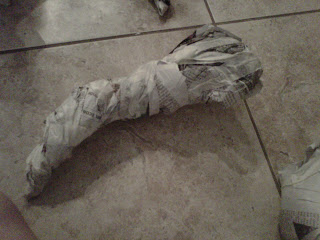 When I figured out the shapes I wanted the roots, I started filling in gaps with more crumpled paper and tape. Then hen it all got several coats of paper mache and then several more until the base was super strong. 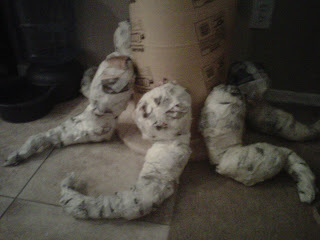 On the top half I started the face.
I just drew on a face and cut it out with a serrated knife. 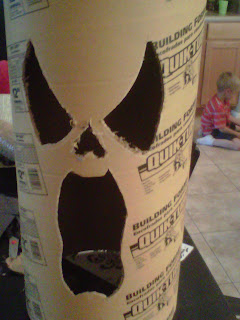 Here it is sitting in the bottom half. 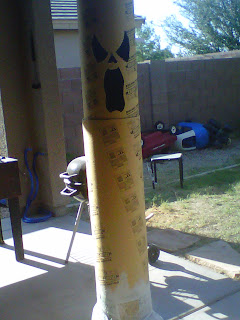 Next using Celluclay I built the facial features 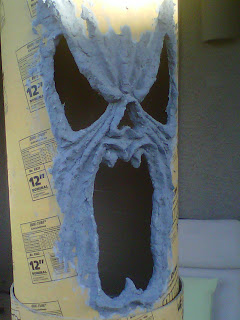 I started building up ridges in the tree with twisted up newspaper and tape, then went over in
more paper mache.


I tried to match the bottom ridges to the top as best I could.
Also, I used tape as a guide on the top half to show me exactly where it met the bottom. 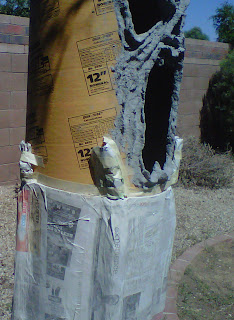 Here are the two halves apart all paper mached 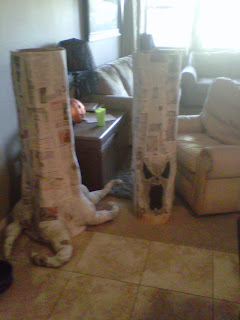 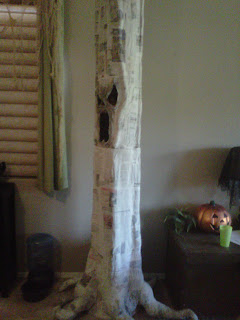 For the top branches I used coat hangers and taped them to the tree really good before buliding up and then paper maching over the whole thing.

I wanted to make more branches but I really am behind schedule right now, so it got only a few for this year maybe I will add some next year.. 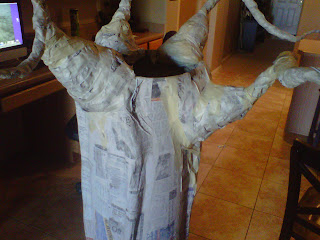 For the bark I decided to use more celluclay because I have a bunch of it. I used a whole bag on this tree.
I would just glob it on and then smooth it out a little in sections.
Then I would get my fingers a little wet and scrape it to make my bark texture, clumps and lumps are a good thing. 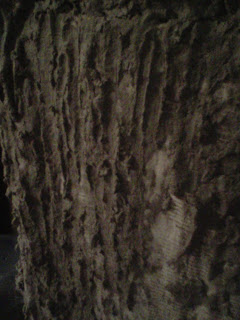 Here it is finally dry and ready for the paint. 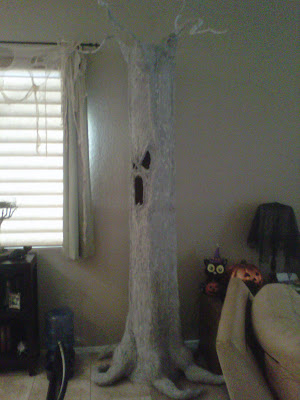 I used a base coat of a charcoal black color I had on hand called fittingly called  'black magic'.
As I was going I would brush on and blend in (while it was still wet) a brown color in the highlight areas, just to give it a little more depth of color. 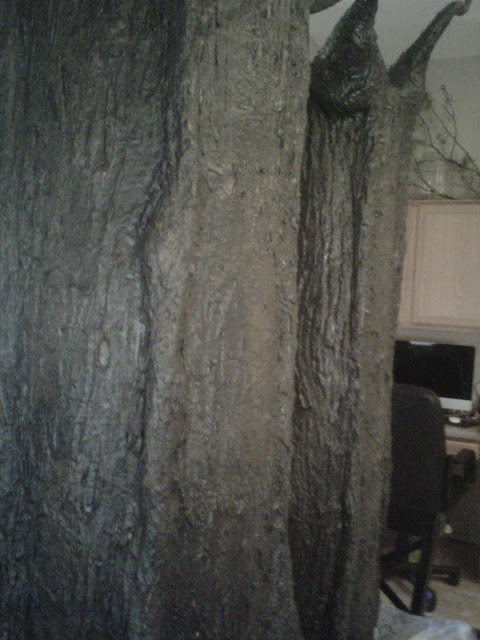 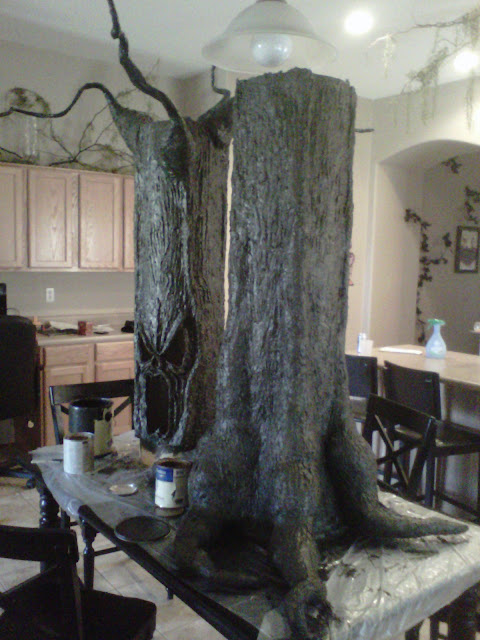 Lastly I dry brushed on a lighter taupe color.
No closeups of that...Hmm I need to take a good bark pic too and add it here. 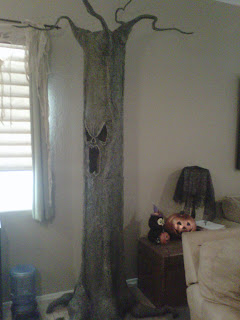 I decided for now to just use some tissue paper tacked behind the face diffuse the light a bit.
For the top branches crawling across my ceiling, I can't make them permanent because like I said it needs to store and I don't want to be married to this height incase I move.
So I took some old branches I had saved from the last tree trimming, using eye hooks and fishing line I attached them to the ceiling with the bases just resting inside the top of my tree.
Now they have the appearance that they are coming out of the tree but they are really just hanging from the ceiling over it. Also, this way I can add more branches and fan it out as far across my ceiling as I want. 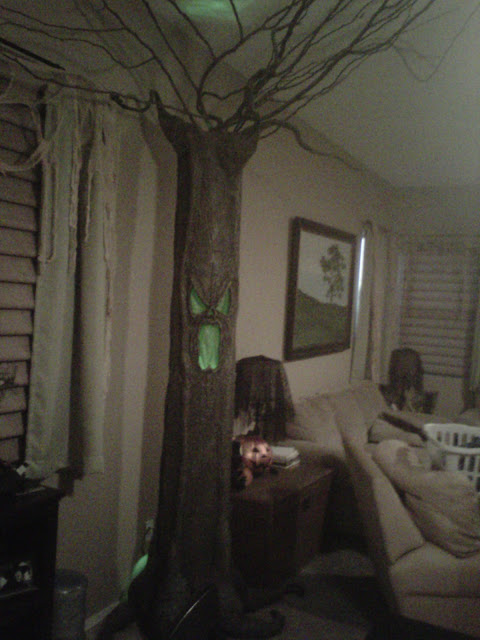 I will be adding some green to the branches as well soon,
but for now I need to go put away that laundry in the picture. 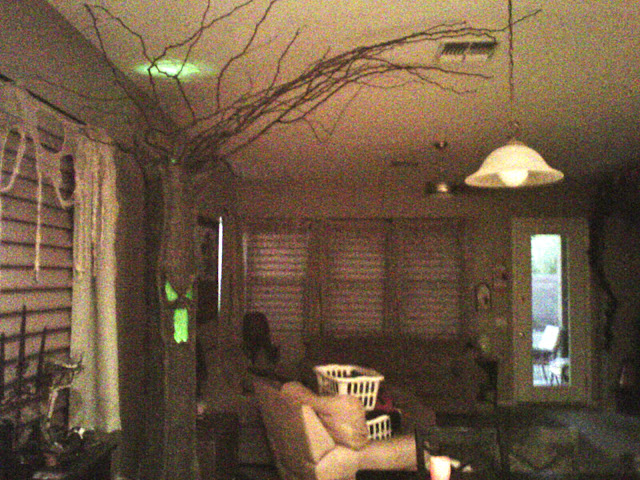 NOTE:
I will be adding pics soon of the finished tree and it's creepy hanging greenery.
Also maybe a cleaner house in the next picture.
Posted by Mizerella at 12:12 AM