I have always loved scarecrows.

They are not that hard to make and can be practically free if you have some basic stuff laying around the house. Scrap wood, old clothes, hats, gloves, some burlap, tree trimmings, old sheets etc.... the possibilities are endless.

One of my favorites scarecrows is from the movie Sleepy Hollow.
So simple, So classic, So Halloween!


The first scarecrow I made was after seeing that movie. I did it in an afternoon with some wood, old branches, black plastic, and a Funkin( fake pumpkin).


Ok my early work is not the most artistic, but it was last minute. I was very proud of him at the time. He stood 8 feet tall and got a lot of attention that night. Actually I kind of miss him.
May have to do a new version soon.


So I eventually stumbled across Pumpkin Rot.
A lot of people know him well. He is an amazing artist and The Scarecrow Master!!
If you haven't heard of him, go right now to his page ( should be in my links ) and look at his outstanding stuff!

So Pumpkin Rot has a scarecrow on there named Johnny Appleseed.
I love it so much. It instantly reminded me of the Jeepers Creepers 2 scarecrow. I remember wanting to make one too when I saw that movie. Only his has that signature eerie, rural, gothic Rot spin.


I am not exactly sure how Pumpkin Rot makes his stuff, but this is how I decided to do mine.
Mostly with stuff I had on hand.

I have had a couple of these large plastic skulls sitting around for a while. I got them on clearance a few years back, never could figure out what to do with them. They are bigger than a normal skull not very realistic looking. So I decided to use one here. 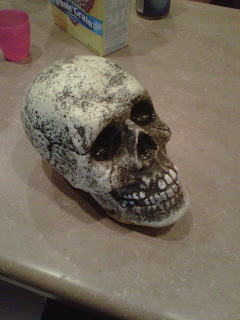 Fist thing I did was build a thick neck.... I wanted that confusion "is that a person in there?" I did this by balling up news paper and building it up securing with masking tape. I just played with it until it looked right. Then I covered it with several layers of paper mache to make it very strong.


Sorry  I forgot to take pictures of the next two parts.

This thing needed to be weather proof so after the mache was completely dry I did two coats of DryLok.

I then hollowed out the crumbled newspaper inside the neck, all the way up to the underside of the plastic skull. I DryLoked the inside too sealing all paper parts.

Next I got some scraps of burlap and dipped it in just plain elmers glue. I draped it all over the head, building features with the wet burlap. 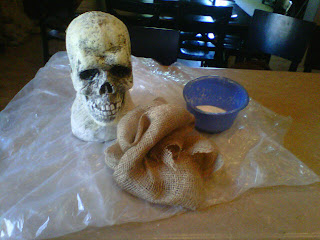 Thick heavy brows, stronger cheek bones.
I left the eyes somewhat uncovered, built up the nose a little leaving nostrils holes, and left a gap for the teeth to bite through.
All the better for him to see you with, smell you with, and EAT you with!!! 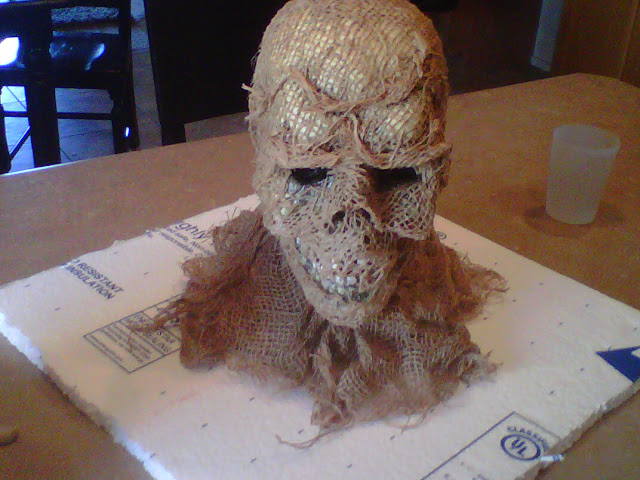 The glue made the burlap a little brittle when dry, just in the hanging parts really.
I probably could have used Monster Mud instead, I was just too lazy to make it.

Anyway the next step made it strong.

After he was dry I did several coats of DryLok. 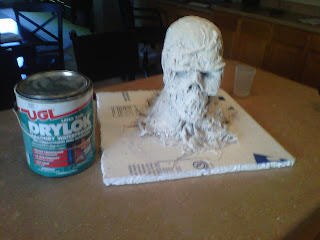 I painted the whole thing with a brown house paint (again, gotta love the oops paint).
After the base color was dry, I washed it with watered down black paint.
Then I dry brushed on a light burnt siena/ yellow ochre mix, to highlight.

For the hat, I just cut  a circle of cardboard and cut out a hole for his head.
I wanted a very tight fit so the wind wouldn't blow it off.
I covered the part of his head sticking out with plastic wrap, and then covered that with duct tape.
I used crumbled newspaper and masking tape to give the top of the hat the shape I wanted.


The hat got several layers of paper mache, a layer of scrap fabric dipped in elmers, 3 coats of dry lock, and paint (same base coat and black wash as the head but a taupe color on the highlights).
All of these drying completely between each layer of course .

So before all this, I had found the perfect trench coat at good will.
This is the key to the look I think. I actually see them a lot at good will. This one was particularly large, which was even better. 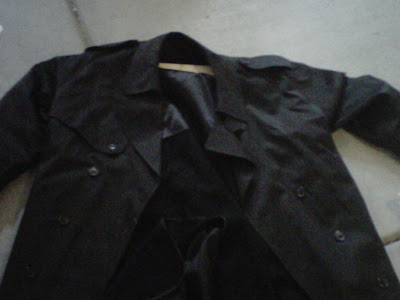 Again, sorry for the lack of images for the next part, but it's pretty simple.


I made a cross with two piece of scrap furring strips.  A longer one about 6' going vertically, and a shorter one, about 3' horizontally. Secured them with screws.

The top of the vertical piece came up about a 12" from the horizontal wood strip ..enough to fit his head on securely.

I played with the head a bit, deciding on the right position. I wanted it slouchy... like the inspirations.

I then marked the best spot and drilled a hole into the plastic underside of the skull. I had to cut it a little with and exacto knife to get it big enough to go over the end of the furring strip.

I put the jacket on the cross before going further.

I pulled the sleeves back so I could work with the arms.

I wanted the twig arms and body like pumpkin rots.
I like how this is confusing and more supernatural. I imagine coming upon it "Could that be a man? No it can't be. But it seems Alive!  WHAT THE HELL IS IT?!!"

So attaching the twigs is fairly simple.
I just stacked and layered branches until I liked the way they looked.
I used a combo of twine, floral wire to secure them.
I then dripped hot glue in between the branches and all a round to really make it strong. 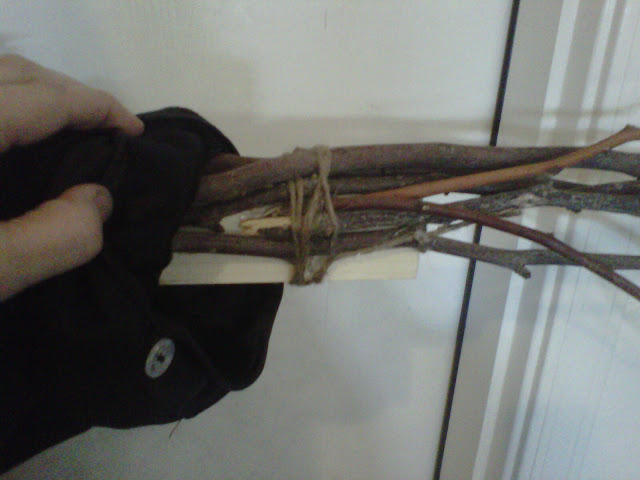 For the body kind of the same thing I used bigger twigs and branches and wrapped them up trying for a
vine like look.


I noticed his shoulders (where they meet the neck) not looking thick enough.
If you look at the picture a few above (with both sleeves pulled back) you can see kind of what I mean.

So using some coat hanger wire I rigged a little something to beef it up. 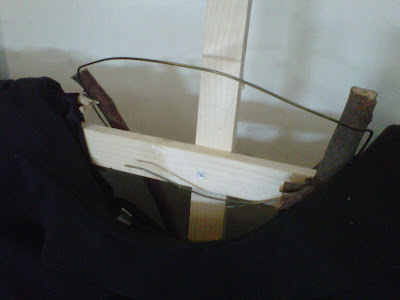 So to secure him in the ground. this is very important so he doesn't become top heavy and snap.

I can't believe I didn't get pics of this important part!

I used a very long and thick wooden tree stake and pounded it the earth. It almost went up the whole way of his back.  A small cross piece was nailed to the tree stake where the bottom of his furring strip rested. I secured it with huge zip ties and screws it wasn't going anywhere! It's actually not complicated, but those directions are making it sound harder than it is. In fact anyone could probably figure out a dozen other ways to stake him down

(Ya know what, I am going to draw a diagram of what I did. I'll edit and add that here later.)

So anyway here is an image of him complete. 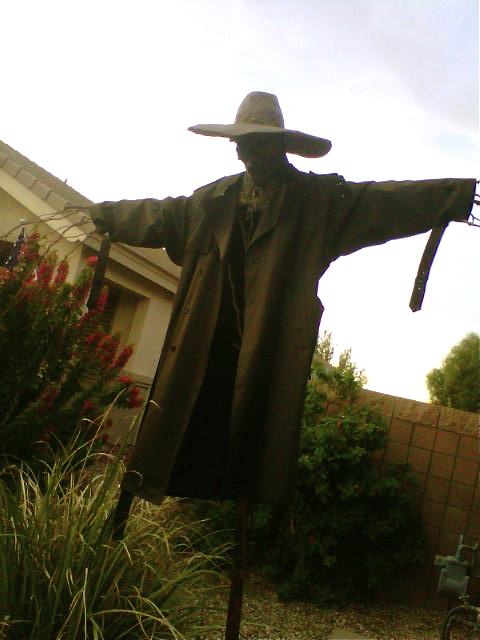 I love how he rocked, just slightly in the wind, and his coat looked amazing flowing in the breeze.
At night I had a red uplight shinning on him.
But still wind or none, day or night... he always looked very sinister.

He was a wonderful spooky addition to our yard this year.

Thanks for stopping by.